The History of LGBT 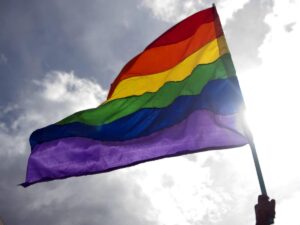 The History of LGBT

February is LGBT history month in the UK. It is often viewed and discussed in the context of legal developments and a look at the progression of LGBT rights. However, LGBT history encompasses so much more than that, social history, political history, cultural history and developing symbolism. The concept of categorising and labelling people as having particular sexual orientations or gender identities is a relatively recent concept and there’s a whole raft of history that is hidden or difficult to define.
I actually find the social history to be the most interesting and illuminating form of LGBT history, particularly the personal stories of normal LGBT people living in different times. Same sex relationships and Trans identities are not new and there are examples throughout history of people expressing different and varied gender and sexual identities.  However, I understand why the legal history is the focus as it is the law that historically gave legitimacy to people’s prejudices and subsequently declared such intolerance unacceptable.
The progress made in removing discriminatory laws and rules in recent year has resulted in more people being able to openly discuss their identities and made wider ranging diversity more visible.  With improving visibility we can continue to learn and improve the protection for the LGBTQ+ community and its allies.
For me, the key and most impactful moments of legal LGBT history are:
Sexual Offences Act 1967 – This act decriminalised, consensual sexual acts between men, aged 21 and over that were carried out in private. It introduced the term “homosexual” into English law for the first time. It had been a long time coming. In early 1954 there was concern that a homosexual ‘witch-hunt’ was going on. In 1952, the year Alan Turing was prosecuted, there were over 5000 prosecutions.
In August 1954, the Home Secretary, David Maxwell-Fyfe announced an inquiry chaired by Sir John Wolfenden to advise on the reform of laws for prostitution and homosexuality. The fact that these two things were considered together is problematic enough. The Wolfenden report was published in 1957 favouring tolerance and reform but also urged research into a “cure” for homosexuality. No political majority for change existed at that time and whilst the recommendations relating to prostitution were implemented quickly, it was a further 10 years before the laws changed for gay men.
In 1967 Home Secretary Roy Jenkins made sure a private members bill calling for decriminalisation got parliamentary time.   MPs tried to defeat the bill by ensuring it ran out of time but it was eventually passed, by one vote, on 5th July 1967.
During the 1970s and 1980s social progress was made with increasing freedom and acceptance of homosexual relationships, but the impact of the Aids Crisis, and the developing freedom, resulted in the retrograde step of introducing s.28 of the Local Government Act 1988. Section 28, very simply, stated that local authorities must not “promote homosexuality”.
It was never clear how you could ‘promote homosexuality’. The Act did not create a criminal offence. There was no successful prosecution using the clause. However, it did cause misunderstanding and misinformation. Section 28 did not apply to what was taught in schools, but newspapers and the general public believed that it did. Teachers who might have talked about healthy relationships were discouraged leaving another generation of children to grow up in a national and local culture of homophobic bullying.
Section 28 was not repealed until 2003 and, since then, campaigners have fought for sexual health and relationships information in schools to include same sex relationships. In April 2019, parliament passed new regulations for teaching Relationships and Sex Education (RSE) in England. Since September 2020, all secondary schools in England have been required to teach RSE, and all primary schools in England have been required to teach Relationships Education (RE). Schools can decide exactly how they teach RSE and RE, but the guidance sets out the key information that pupils should be taught. At secondary level, all schools must teach about sexual orientation and gender identity. At primary level, all schools must teach about different family types, which can include LGBTQ+ families.
There’s then a period of 3 years between 2003 and 2006 when there was real progress, often driven by European legislation.

More recently, same sex marriage became lawful, including, religious marriage in some churches, although not in Roman Catholic or Church of England. The Methodist church, only last year, authorized same sex religious marriage, which, as the fourth largest religious organisation in the UK, is significant. That said, same sex marriage was only made lawful in 2020 in Northern Ireland.
Much of the conversation in recent years has focused on the progression of trans rights with increasing recognition of the variety of gender identities and the difficulties with limiting legal rights to those that have a formal Gender Recognition Certificate. The Employment Tribunal recently confirmed that the protected characteristic of Gender Reassignment in the equality Act 2010 can include individuals that self-identify as a gender different to that they were assigned at birth.
History does seem to repeat itself with many of the arguments against the development of civil rights for people in same sex relationships playing out again in the context of trans rights. Understanding LGBT history to date and the impact of the limitation of civil rights on those affected is important for ensuring that we move in the right direction for the reduction of hate crime, homophobic and transphobic “banter” and the development of a diverse and inclusive workplace and society.